Difficulty
This week in game design was more of a warm up, going over some topics we had already gone over before. Among them of note was difficulty though and that’s something I wanted to get more in depth with for this post. There are a variety of ways one can ramp up the difficulty, and I don’t mean for any specific game. There are general methods, such as the easier to implement, selectable difficulty (from easiest to hardest), the pacing of the game (making it harder as you go along) and the most interesting of all, dynamic difficulty.
Dynamic difficulty is the hardest to implement in any game because you have to detect just how well a player is doing. It can be several things, from observing and noting behaviours, to seeing how well they are doing over the course of the game, etc.
Different games have different ways of implementing this and it’s not always a common sight in games. Some examples though include changing the layout of a level, changing enemy strength and smarts, changing the rules and restrictions of the game, etc. This of course applies to any sort of difficulty change, but dynamic difficulty is more interesting because it has to watch carefully how you’re doing and make the right transition smoothly. The reason people might want to use this dynamic difficulty is so that players are always given adequate challenge.
Flow Theory
Quick note, we went over flow theory which is in essence, being in the zone. Time seems to slow down for you, you’re completely focused on the task you’re doing and you’re not really thinking about it, you’re just doing things automatically. This is a state that game developpers would like to strive to achieve, so that people will be spending all their time fully immersed in the game. In order to achieve the state, you can’t be bored, meaning it’s not too easy and it can’t be too difficult. This all depends on your skill and the difficulty of the game.
So to go with what I was talking about dynamic difficulty, difficulty changes to match your skill so that you get into the flow of the game! Well this was a longer introduction than I expected to do but it’s important. For the game of the week, we will go over Super Smash Brothers Brawl and how their AI is difficulty wise, and some interesting behaviours that many people have been observing closely, I will get into that later on.
Game of the Week

Super Smash Brothers Brawl is the third entry in Nintendo’s very popular party fighting game franchise. This one, being on the Wii boasts the largest cast of characters, stages, items, unlockables and secrets. The game brings together characters from various series of Nintendo’s history as well as guest characters including Sega’s Sonic the Hedgehog and Hideo Kojima’s Solid Snake from the Metal Gear Franchise. 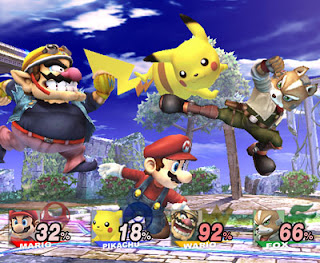 Combining franchises from all over Nintendo since 1999
Basic information on the game
2 to 4 players compete in battles with the goal to knock their opponents off. Rather than dealing with “vitality” like most fighters do, whenever you hit an opponent a percentage increases, which designates how far a character will fly when they are hit. The goal is to knock them off the stage, preventing them from getting back on or knocking them to any of the four sides of the screen. 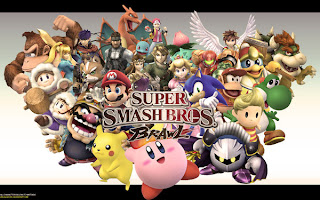 The entire roster of characters in Brawl
Player’s choose from a large roaster of different characters all with different attacks and abilities, including abilities that aid the player in getting back onto the stage should they be knocked down. For your attacks, you merely press either the a button or b button (on gamecube controllers) and a direction on the control stick to execute different attacks. You can pop up a defence shield to absorb attacks, as well as dodge either by rolling or in place. To counter shields, you can execute throws against opponents which will snag them no matter if their shield is up or not, but they can still be dodged.
A Free for all match between four players online
The system is easy to get the hang of but there is enough depth that the better players will always come out on top of the weaker players. The game has a variety of systems that keep the action frantic and exciting, the inclusion of items which can turn the tide of battle in your favour or against you and the newest item being the smash ball, which allows characters to use a devastating ability against your foes. 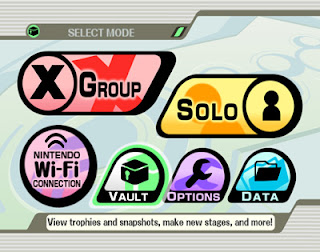 Main menu
There are a variety of single player modes, including a decently long adventure mode titled Subspace Emissary with an unsurprisingly uninteresting plot. Other modes include, multi-man melee, where you must defeat a bunch of faceless enemies or survive as long as possible, home run contest, classic mode (fight against a variety of opponents with special modifiers such as 3 vs 1 giant character), as well as being able to fight the computer in multiplayer. Multiplayer consists of online modes, special Brawl where you can choose from different modifiers (such as giant characters, all metal characters, etc) to make it more interesting, tournament modes, and the normal multiplayer mode. In all multiplayer modes you can fight against ai opponents.
The Artificial Intelligence
I am sure most of us already know what Brawl is all about so I won’t go any further into other features in the game like that, I want to get into what I was focusing on before, the AI. Now when you choose CPU opponents you choose from a variety of different levels, 1 to 9, 1 being the easiest and 9 being the hardest. At level 1 for example, they usually just walk around, throwing a random attack every now and then, while on the other side a level 9 players will be using their entire arsenal of moves, dodging and shielding your attacks and acting more like a human player. 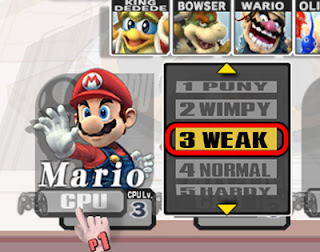 
I found a very useful post, with some videos testing the AI, it's actually pretty neat. This person is trying to break down the way the AI is able to adapt to situations. Unfortunately there isn't too much more progress with it, but the information that was found is interesting.
http://www.smashboards.com/showthread.php?t=204662

Email ThisBlogThis!Share to TwitterShare to FacebookShare to Pinterest
Labels: Game Design and Production I, infr2330

IceNinja77
Mainly a gamer but now a learning Game Developper. I also started trying to do art about 2 years ago. I've also started my own League of Legends comic series but need to get back into making them.